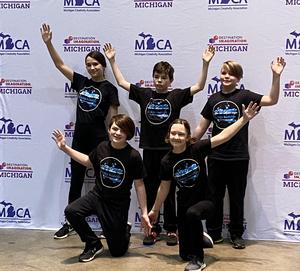 The Alamo Elementary Destination Imagination Team wowed the judges at State, coming in 1st place and are now headed to Global Finals for an amazing competition and experience.

Destination Imagination is a global competition focused on STEAM - Science, Technology, Engineering, Art and Math. DI focuses on creativity in problem solving and the importance of teamwork, communication and asking the right questions to find solutions. Their website states: “We inspire young people to imagine and innovate today so they become the creative and collaborative leaders of tomorrow”. The competition includes two challenges - a prepared team challenge that students work on all year - and an instant challenge. Students are aware of the potential instant challenges, but don’t know which one they’ll be asked to do until the competition. In the instant challenge, students might be asked to complete a task, create a performance or do a combination of both.

The Bubble Buddies picked the Fine Arts Challenge this year called Tricky Tales. They were asked to create a story that included a trickster, an illusion and a costume that transforms. The team came in 1st in their Central Challenge and 1st in Instant Challenge. They also received a Spirit of DI award. “The special award was given to them for proving that ‘the show must go on’ when one team member became ill moments before the team was to enter the performance site,” explains DI team manager Terry Webber, “The team did not hesitate and jumped into action and switched roles ready to perform. In a movie tale ending, the ill team member returned seconds before they went on stage. The team warmly welcomed her back and quickly switched back to their original roles and gave a stellar performance. It was a proud moment.”

The Bubble Buddies are fundraising for their trip to Global Finals.  If you are interested in helping the team out with a donation, please contact Terry Webber at Alamo Elementary, or email [email protected]. You can also donate online here.

Their next fundraiser will be a Pop Can Drive the week of April 11th. Many thanks to those that have contributed and a special thanks to the Otsego Public Schools Foundation, the Alamo Foundation, as well as other local businesses for donations to the team.