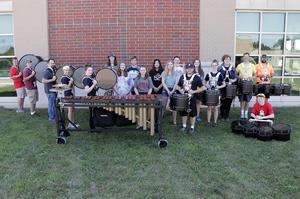 It’s been more than 25 years since Mark McPherson played percussion for the OHS Band, but his experience with the Otsego Fine Arts programs never diminished which prompted him to give back in a big way this year. After enjoying a concert last year, he started thinking about what he could do for the band.

“Fine arts are near and dear to my heart. I was a music education major in college and helped with the band for five years,” McPherson says. He was also in the choir.

He asked band director, Mitch Piersma, what they need and percussion was at the top of the list, "We were quite in need of a new set of marching percussion equipment - we had been borrowing parts from one drum to save another," Piersma says. "This donation was unexpected, but came at the absolute right time."

McPherson played percussion for seven years while at Otsego and all three of his children followed in the same footsteps, graduate Collin, senior Seth and freshman Mya, “It’s cool to do something like that,” he says. He’s been very successful in his career and has in turn been very generous to his alma mater.  He donates yearly to both the band and choir boosters programs, as well as the district’s robotics and STEM programs, but he’s been looking to give back in a bigger way. There are 11 pieces plus the marimba in this set, resulting in a $20,000 donation.

"We are thankful for Mark McPherson and Tengam's contribution to our program. The drums are the best you can get and we plan on enjoying them for years to come."

As a former player, McPherson says he knows what brand new instruments can do for confidence and performance, let alone what the fine arts programs can do for their future, "When I think of how band and choir impacted my life and what I do now; I wouldn't be where I am without them." He references the confidence, creativity, teamwork and problem-solving skills.

You can catch the kids performing with their new instruments during marching season starting this September.